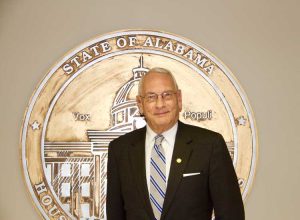 Victor Gaston, who has represented Alabama District 100 since 1982, making him one of the longest-serving members in the Alabama House of Representatives, is retiring after 40 years of government service. His current term ends Nov. 6, 2022, and he will not seek re-election.

Before his time in office, Gaston worked as a teacher and administrator for Mobile County Public Schools. He was a timber farmer and served in the U.S. military as a member of the Marine Corps Reserves and the Alabama National Guard.

Gaston currently serves on the Rules, Ways and Means, General Fund, Transportation, Utilities and Infrastructure, and Mobile County Legislative Committees. He chairs two committees, the House Legislative Council and the Permanent Oil and Gas Study Committee, and is the vice chair of the Joint Legislative Council. Gaston is a former member of the U.S. Energy Council and speaker pro tempore.

He sits on the advisory council for the Assistance League of Mobile, the American Legislative Exchange Council (ALEC), the State Building Commission
and the Southwest Alabama division of the National Mental Health Association. He is a member of Phi Delta Kappa and a former member of the White House
Commission on Presidential Scholars.

According to the state’s website, Gaston has received numerous awards and honors for his time in service, including: