The Impact of Tariffs on Alabama Small Businesses

The Business View – November 2018 / The Impact of Tariffs 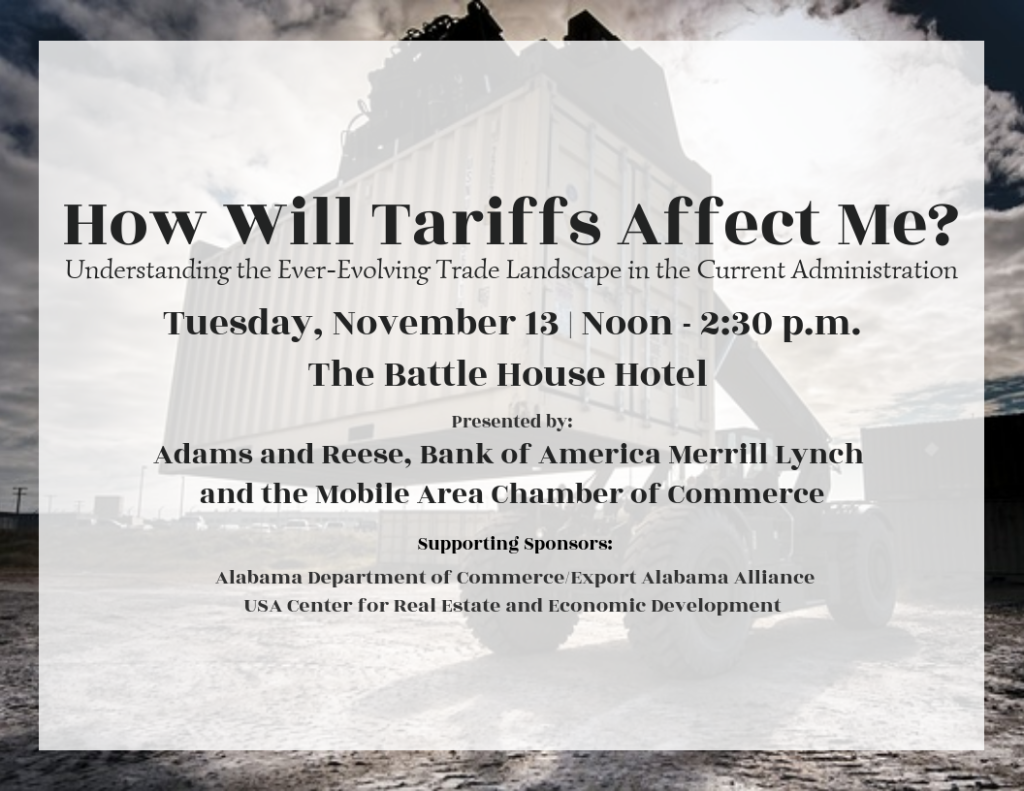 The impact of any federal regulation on smaller businesses is often lost in the 24-hour news cycle. This is especially true for import tariffs, which most media outlets only cover at a national or macro level.

When viewed individually, and in geographically diverse locations across the country, the increased costs and lost jobs at small businesses are seemingly insignificant. Conversely, when one steel mill closes, the local impact is both significant and noticeable. Politicians pay attention, and the story appears on the nightly news and on social media.

On March 8, U.S. President Donald Trump issued a proclamation instructing the government to levy tariffs on imported steel and aluminum, citing section 232 of the Trade Expansion Act of 1962.

While the majority of the statements issued by the administration – both in written and digital format – have focused on the large trade imbalance between the United States and China, Section 232 deals specifically with the impact of imports on national defense.

Regardless of the rationale used to justify the tariffs – which has ranged from national security to unfair competition to soaring trade deficits – there is no doubt that both the producers and consumers of these products will be impacted.

This does not reflect a lack of interest, concern or sophistication on their part, but rather illustrates how challenging it is for the CEO of a small firm to deal with a rapidly changing trade environment.

Where large firms have entire teams that monitor and report on trade flows and pending legislation, smaller firms are often less aware of the individual Harmonized System (HS) codes used in their supply chain, or in their supplier’s supply chain.

The recently enacted steel and aluminum tariffs will have the largest impact on these industries in Alabama: auto parts manufacturers, aerospace parts manufacturers, craft breweries, metal fabrication shops and construction firms. Politicians would be wise to observe that two of the most robust manufacturing sectors in Alabama – automotive and aerospace – will be negatively impacted by these tariffs.

Economists estimate the steel- and aluminum-consuming industries could lose as many as 179,000 jobs. That estimate does not include the potential losses related to China’s targeting of America’s agriculture sector with retaliation tariffs, which would impact Alabama directly.

Soybeans, one of the crops targeted by China, are Alabama’s top agricultural export by dollar value in 2017.

Does the end justify the means? How much of the trade deficit has been reduced? According to the Census Bureau’s FT900 report (September 2018), the trade deficit has not changed, and the economists at the Federal Reserve Bank of New York don’t expect it to change. They have noted that while tariffs may decrease the amount of foreign product entering the United States, increased costs and retaliatory tariffs will make American products less competitive. The result will be lower overall trade, with no meaningful change in the balance.

While the United States was making headlines this summer with the imposition of tariffs, further negotiations with our trading partners stalled. Sensing a leadership vacuum, other countries quickly stepped in to fill the position we once held. By July, the European Union and Japan were able to conclude a trade deal eliminating more than $1.1 billion in tariffs for European exporters and double that amount for Japanese exporters.

The agreement covered sensitive domestic industries like automobiles in Europe and dairy in Japan, and addressed non-tariff barriers, such as the stringent technical requirements related to pharmaceuticals, medical devices and textiles. The European Union is quickly working to secure deals with Singapore and Vietnam. In September, it hoped to conclude a deal with the MERCOSUR group of Argentina, Brazil, Paraguay and Uruguay, the world’s fourth-largest trading bloc.

Political points may be scored during this back-and-forth with our trading partners, but history shows that the expenses incurred by American consumers, manufacturers and workers usually outweigh the economic benefits used to justify the tariffs. Where inequities exist and action is required, a thoughtful and strategic approach at the negotiating table would likely yield a more stable operating environment for all involved.

“How will this impact my business?” is the question most often fielded by my colleagues. While most small business owners are aware of the discussion surrounding import tariffs, few actually have a firm grasp on how the changes will impact their bottom line.