The Business View – May 2018 / International Trade 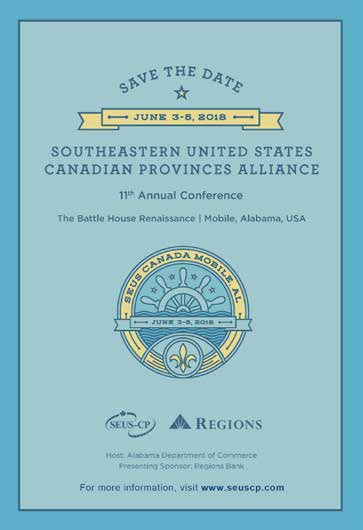 With World Trade Week slated for the third week of this month, Mobile’s recent strides in attracting foreign direct investment (FDI) – and the high-skill, high wage jobs that accompany it – indicate the Port City’s successful advocacy for exports across a broad array of sectors shows zero signs of slowing down.

“FDI can raise a region’s attractiveness to other firms from the country of the investor,” said Stimpson. “We certainly see this with the clustering of French companies in our area. It says a lot about the openness of our community, being probusiness and our acceptance of different cultures.” More than 75 percent of Mobile’s internationally based business interests hail from Europe, she added.

Indeed, with roughly 50 foreign-owned companies currently employing more than 13,000 people in Mobile, foreign direct investment has exploded in the past decade. Since 1960, 19 countries representing 13 industry sectors have staked prominent claims in the Port City. More than half of that figure set up shop locally since 2000.

“We also have to consider when a foreign firm creates a U.S. presence in our community, that the company has done its homework,” said Stimpson. “They are likely at the top of their industry and have made a strategic decision to come into our area. They often bring very innovative ideas and skill sets that they will use to train our workforce.”

Shane Stephens, a consul general of Ireland based in Atlanta, visited Mobile Aeroplex at Brookley in early February as part of a delegation of European representatives touring the Gulf Coast to celebrate “European Union investment in this part of the world, and trying to do what we can to build up economic ties between the European Union and the U.S.”

Stephens was joined on his visit by consuls general from Belgium, France, Great Britain and Germany, all of whom participated in an FDI roundtable hosted by the Chamber.

“Relationships are key,” Stimpson said, adding, “We are consistently engaging with foreign consular offices and embassies and international site consultants to encourage official visits to Mobile. We believe these visits showcase Mobile as a global gateway for starting a business in the United States and our hope is that these messages are well-received and positively conveyed to their foreign and domestic colleagues and clients.”

“They’re very serious about building those relationships which can be productive,” Stephens told reporters covering the visit, while viewing firsthand the footprint Dublin-based MAAS Aviation has established at the aeroplex. “There are signs of seriousness and focus and working hard for investment here. There has to be a kind of across-the-board comprehensive approach. It’s not just about having the right financial arrangements. It’s about being genuinely and deeply welcoming. It’s about having an administration that helps solve problems.”

Stimpson said the Chamber’s FDI strategy is actually quite simple.

“The Chamber is working to build our global engagement strategy to develop a strong understanding of our region and its ability to expand and provide local resources specific to foreign industry,” she said.

“In Mobile, you can find low-cost real estate, a strong workforce and competitive incentives, like AIDT, which is designed to recruit and train a qualifying company’s entire workforce to company specifications at no cost. But Mobile has a very unique logistical and geographic advantage. Interstate systems, rail connectivity, air service and deep-water port access are all factors that are considered by global investors. How can they quickly get their product to the customers at the lowest cost?

These factors are all Mobile strengths. Not only can a global investor quickly service the domestic market, but they can use Mobile as an export platform and take advantage of U.S. free trade agreements like CAFTA (Central American Free Trade Agreement) and NAFTA (North American Free Trade Agreement), and use our proximity to other South American and Caribbean countries,” Stimpson said.