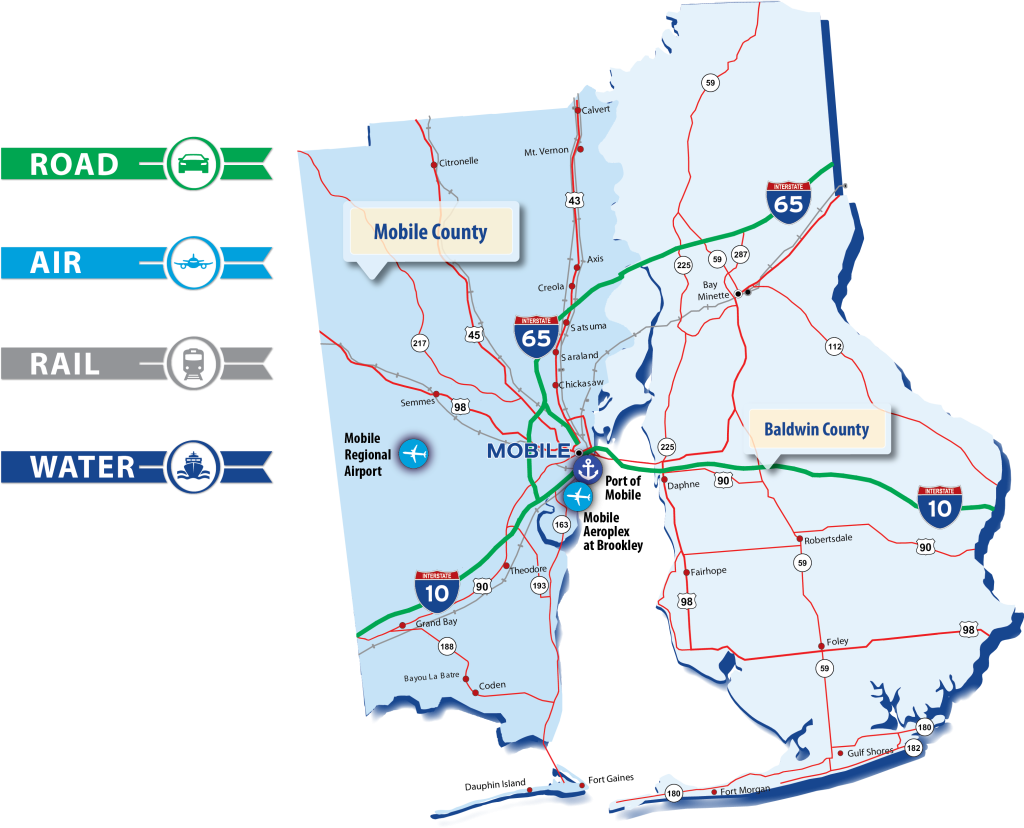 When it comes to infrastructure and extensive transportation options, Mobile leads the way. The city’s strategic location on the central Gulf Coast and abundant transportation options keep business moving and growing. Major rail, ship and highway transportation systems converge along the Mobile River at the Port of Mobile to link Mobile businesses with the nation and the world. In addition to a deepwater port, Mobile has two major interstate connectors, five Class 1 railroads and two airports.

Mobile has been on the move for decades developing its transportation infrastructure to better serve businesses and the community, including these recent projects:

Mobile provides companies with highway transportation access to major markets across the United States. Two major interstate highways converge in Mobile, with I-10 extending east to Jacksonville, Fla. and west to Los Angeles, Calif., while I-65 extends from Mobile north to Chicago, Ill. Major metropolitan areas such as Atlanta, Charlotte, Houston, Memphis, Nashville, Tampa, Jacksonville and Orlando, are all within 600 miles (1,000 km) of Mobile.

There are over 65 motor freight carriers certified to transport interstate shipments to and/or from the Mobile area. The majority of the carriers have a Mobile area terminal, with many carriers offering container services.

The Mobile area is served by six railroads, five of them Class-I railroads, converging at the Port of Mobile and include intermodal service for companies importing and/or exporting.

A former U.S. Air Force base located on Mobile Bay near downtown Mobile, Mobile Aeroplex at Brookley has been transformed into a leading 1,650-acre (667 ha) industrial and trade complex. Built around a fully operational airfield with a 9,600-foot (2,926 m) runway, the complex offers transportation infrastructure second to none. Along with a fully-operational airport able to accommodate the largest aircraft, Mobile Aeroplex at Brookley provides superb road and rail access.

From the Mobile Downtown Airport, near the port and downtown, Mobile has FedEx air cargo service. In addition, Frontier flies from BFM to Denver and Chicago.

The Port of Mobile offers public, deepwater terminals with direct access to five Class 1 railroads, two interstate systems (I-10 and I-65), a weekly rail ferry service to Coatzacoalcos, Mexico, and 15,000 miles (2,400 km) of inland and intracoastal waterways serving the Great Lakes, Ohio and Tennessee valleys and the Gulf of Mexico.

The Alabama State Port Authority owns and operates public terminals at the Port of Mobile. These terminals handle containerized, breakbulk, coal, grain, Ro/Ro, cement and oversized/heavy lift cargoes. This full-service seaport is currently ranked 13th in the nation based on total tonnage. The Port of Mobile is also represented by private bulk terminal operators as well as a number of highly specialized shipbuilding and repair companies, with two of the largest floating dry docks on the Gulf Coast.

Over the past decade, the Alabama State Port Authority has invested more than $700 million toward a capital expansion program establishing new facilities at the Port of Mobile, including a new container terminal, a new steel terminal, expansion at McDuffie coal terminal, a new rail ferry terminal, new warehouses and a new turning basin and two new “super Post-Panamax” cranes.

Alabama Power Company has an abundant electric production capacity of more than 6,000 MW with an expansive grid of 230 KV and 115 KV transmission lines in the Gulf Coast area.

Spire (formerly Mobile Gas) has an extensive natural gas infrastructure network spanning 100+ miles (160 km) of large diameter pipelines with interconnections to multiple interstate pipelines and a local distribution company that has reliably served the region for more than 150 years.

Mobile Area Water & Sewer System (MAWSS) provides safe drinking water and sanitary sewer service for more than 200,000 people in the Mobile metropolitan area. Water is supplied from a 3,600-acre (1460 ha) reservoir, continually fed by groundwater, streams and rainfall. MAWSS has an alternative source of water to provide raw water for industrial use. Many area industries draw and treat water directly from the Tombigbee or Mobile rivers for industrial use.