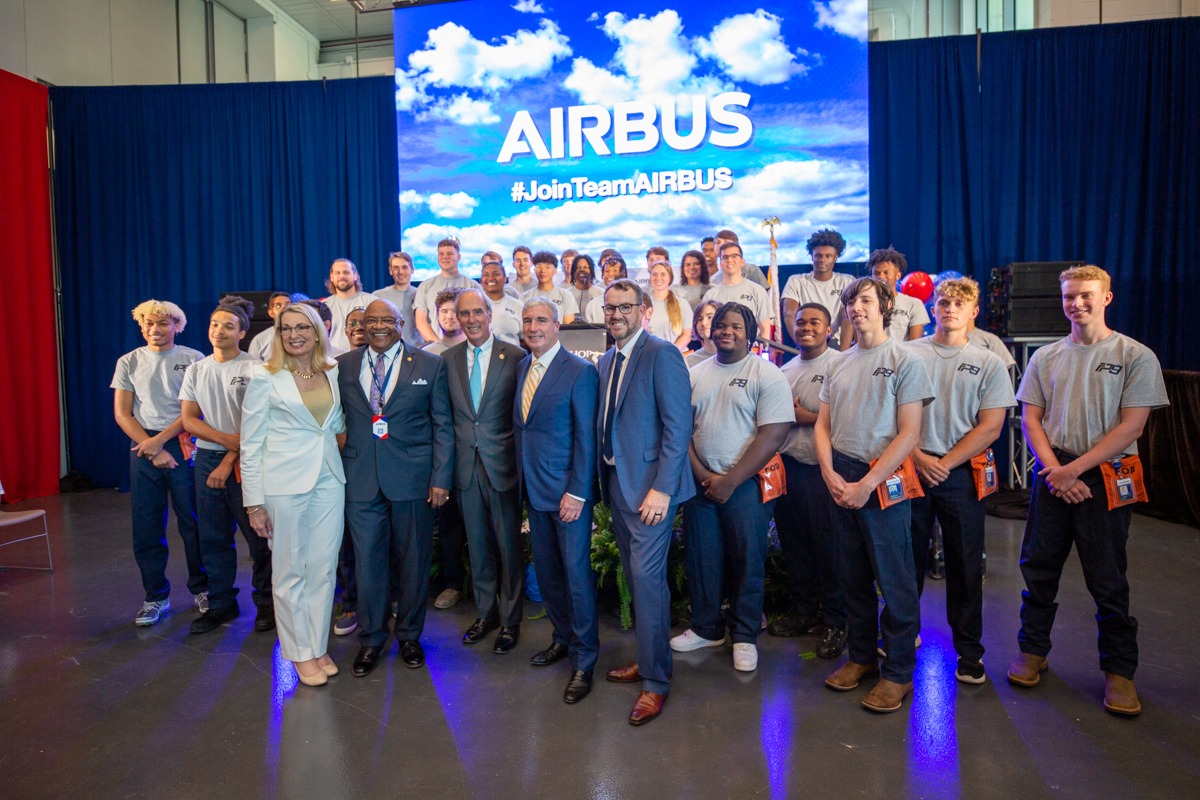 Mobile, Ala. – Airbus announced a third final assembly line will be built at the Mobile Aeroplex at Brookley, as the airplane manufacturer ramps up production in Mobile to 20 planes per month.

The announcement was made at Bishop State Community College alongside the latest class of FlightPath9, an ongoing recruiting effort to train and educate local students with the skills needed to work in the Airbus manufacturing facility.

“The fact that Mobile will lead our unprecedented global production rate increase in coming years is a tribute to the world-class labor force in Alabama,” said C. Jeffrey Knittel, Chairman and CEO of Airbus Americas. “I’m so proud of our Mobile employees for proving through years of hard work what Alabama is capable of, and I’m also immensely grateful to state leadership for making Alabama such a great place to invest and do business.”

Airbus will break ground on the 350,000 square foot facility in the first half of 2023 with planes slated to roll off the new final assembly line in the second quarter of 2025. The expansion will also include a new paint shop and major modifications to their existing hanger.

“It’s wonderful to see Airbus continue to grow its only U.S. airliner manufacturing operation with another expansion in Mobile,” Governor Kay Ivey said. “This growth is made possible by the company’s skilled workforce in Alabama and our commitment to developing a pipeline of future aerospace workers.”

Airbus has invested over $1 billion in its Alabama manufacturing facility. Greg Canfield, Secretary of the Alabama Department of Commerce, said the state’s aerospace/aviation industry is primed for growth.

“Aerospace industry growth continues to be a high-value opportunity for Alabama, not only in terms of capital investment but also in job creation,” Secretary Canfield said. “There are a lot of exciting things going in aerospace and aviation in the state, and we’re seeing that today with the expansion at Airbus.”

The production increase is driven by demand from customers and the growing market in the United States.

“Mobile is quickly becoming a global epicenter for the aerospace industry and the addition of a third final assembly line in Mobile is a testament to our area’s workforce,” said David Rodgers, vice president of economic development at the Mobile Chamber.

“The Mobile County Commission is extremely proud to offer continued support to Airbus for this exciting announcement of a major expansion of aircraft manufacturing at Brookley’s Mobile Aeroplex. The long-term economic benefit of adding a new Airbus Final Assembly Line with 1,000 new jobs is remarkable and a game-changer for Mobile County with generational impact. Thank you, Airbus!” said Mobile County Commission President Connie Hudson.

“We are very excited about Airbus’ expansion at the Mobile International Airport,” said Mobile Airport Authority President Chris Curry. “The growth of Airbus and the construction of a new international airport terminal are in line with the Mobile Airport Authority’s Master Plan. These investments will further enhance Mobile’s multimodal transportation infrastructure, create new, high-paying jobs, and provide premium air service to area citizens.”

About the Mobile Chamber
The Mobile Chamber is a private business organization with more than 1,800 members and the economic developer of record for the City of Mobile and Mobile County. Thanks to the support of the Chamber’s Partners for Growth public and private investors, from 2011 to date, Mobile’s economic development efforts have created 6,557 new jobs and retained 502 more. Capital investments topped $4.43 billion, including 31 new businesses recruited and 56 expansion projects at existing area companies. Additional information is on the Chamber’s website, Facebook, Instagram, LinkedIn, Twitter and YouTube.