Mobile Honors Senator Shelby With The Dedication of Shelby Point 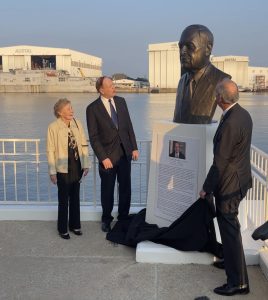 Mobile honored Senator Shelby on Friday, December 9, 2022, with the dedication of  Shelby Point to honor his many achievements and contributions to our community. Shelby Point is located just outside of the Authur R. Outlaw Mobile Convention Center overlooking Mobile’s industrial ship channel.

A bust in the image of Senator Shelby marks the location. The bust was funded by donations from nearly 70 businesses and organizations who donated in Sen. Shelby’s honor. The Mobile Chamber of Commerce Foundation served as the treasury for the project. Donations also funded two new scholarships at the University of South Alabama. Recipients will be known as Shelby Scholars.

“Never before has Mobile had such momentum,” said Mobile Chamber President and CEO Bradley Byrne. “This is a golden era for the Mobile area, and we are reaping the rewards of Sen. Shelby’s hard work.” 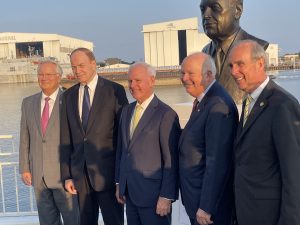 Senator Shelby set the tone for the Port of Mobile to become the fastest growing container port in North America and the gateway of the Gulf Coast. To make the Port of Mobile more competitive. he secured more than $500 million to deepen and widen the ship channel. He also secured hundreds of millions of dollars for the U.S. Army Corps of Engineers to dredge the rivers leading into Mobile. Furthermore, he provided nearly $200 million for the Mobile Airport Authority to expand Mobile’s downtown airport, fostering his vision of Mobile being a major transportation hub.

Due to Senator Shelby’s vision, Mobile has become a global beacon for international industry and multimodal transportation.

In the interest of national security, Senator Shelby secured funds for nearly 30 U.S. Navy ships built in Mobile, as well as significant resources for the U.S. Coast Guard Waterways Commerce Cutter Program and the Aviation Training Center. Additionally, the procurement of commercial aviation in Mobile was due largely to Senator Shelby and his strategic influence. He secured funds for the University of South Alabama to construct several new buildings and supported countless research programs, further preparing the University for success.

The Senator’s support for the area extended into fisheries with his work to substantially expand the state seaward fishery boundary, permitting states to independently regulate their waters. Funding the National Oceanic and Atmospheric Administration fishery counts and reef research were important priorities for Senator Shelby. Through his work on the Appropriations Committee, he safeguarded Alabama’s Gulf Coast with his support for shoreline protection and restoration programs

Senator Shelby’s career centered on his goal to create the conditions for growth and economic success for the State of Alabama. Mobile has been a key beneficiary of that vision.

“Those who go down to the sea in ships, who do business on great waters, they see the works of the Lord, and His wonders in the deep.”  Psalm 107:23-24