Local businesses have a stake in amendments on the November ballot

The Mobile Chamber supports a “yes” vote on ratifying the recompiled state constitution, the four proposed amendments and one local amendment. 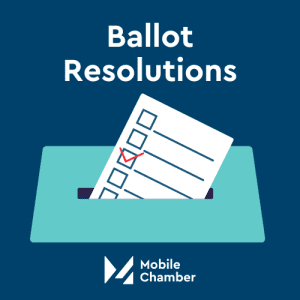 Ratifies an updated and recompiled state constitution, which was drafted by the state legislature following voter approval of Amendment 4 in 2020. Similar subjects are now located together; racist language has been removed; repeated and repealed portions/language have been deleted; all amendments that deal with economic development are placed together; and local amendments are arranged by county.

Allows local governments to use federal funding provided for broadband internet infrastructure and award such funds to public or private entities.

Allows specific municipalities to use a previously established property tax to directly fund capital improvements on a pay-as-you-go basis in addition to using the revenue to repay bonds and other debt.

This amendment provides that any voter-approved amendments on the May or November 2022 ballot will be incorporated into the new Alabama Constitution.