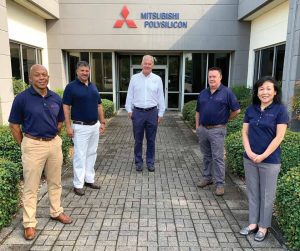 Pictured above are several of Mitsubishi’s employees who were hired as the company began operations in the mid-1990s. They are from left to right, Ronnie Rivers, Jorge Salazar, Matt Wilson, Mike Keevan and Yuko Jordan.

Twenty-five years ago, the Mobile Area Chamber and Mitsubishi Materials announced a major investment, marking the first financial venture by a Japanese company in the area.

At the time, the headline read “National Eyes on Mobile,” and what became a Mobile-headquartered operation is also a wholly-owned subsidiary of Mitsubishi Materials. In 1996, it was one of only a handful of high-tech projects valued at more than $100 million in the United States.

Celebrating a milestone anniversary, Mitsubishi Polysilicon continues to produce high-grade polycrystalline silicon (PolySi) used by the electronics industry in all things that have a computer chip.

“We measure purity to eleven-nines, measuring parts per trillion,” explains Matt Wilson, president of Mitsubishi Polysilicon, referring to the local output as 99.99999999999 percent pure. To put that in perspective, one eyedrop of an Olympic sized swimming pool would not pass the company’s purity test.

The company’s customers, located domestically and internationally, make computer wafers that are turned into

high-quality computer chips, which are the keys to faster processing using less energy.

Mitsubishi increased its capacity by 50 percent twice – once in 2001 and again in 2007. In the late 2000s, Wilson says the industry became overgrown and was depressed for several years but is beginning to recover.

Over the years, Mitsubishi’s PolySi has been used in a number of popular and well-known products including gaming applications from Nintendo 64 and virtual reality headsets for the Wii; internet applications like Netflix, Google, Skype, Facebook, Spotify and contactless payments; cell phone technology and iPhones, Kindles and smartwatches; and other products including the Toyota Prius, 3D printers and ancestry DNA kits.

“We’ve all become dependent on these things to improve our lives,” says Wilson. “Chipmakers are constantly retooling, and as the demand for technology increases, so does the need for a purer product like ours.”

More modern-day examples of how its product is used include the Cloud, data centers and the Internet of Things – refrigerators, grills, air conditioners and anything else you can control with your cell phone.

According to Wilson, the Theodore facility is one of less than 10 in the world in this highly specialized industry and is responsible for approximately 5 percent of PolySi production worldwide. The company employs 150 people and is engineering-intensive, says Wilson.

“We love seeing a company like Mitsubishi Polysilicon celebrating such a monumental year in Mobile,” says Christina Stimpson, the Mobile Area Chamber’s director of economic development. “One of our goals in economic development is to heighten international awareness that Mobile is a top venue for global commerce. Mitsubishi Polysilicon is a great example of that. Mitsubishi uses Mobile as an export platform, allowing for easy connectivity to international markets like Japan and Germany.”