Once a Side Project, Slingshot Aims High and Nails It

The Business View – June 2019 / Small Business of the Month 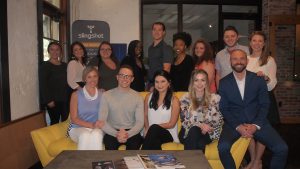 Slingshot Concierge Group started in 1995 as a kiosk in a mall selling cell phones under the name Planet Cellular. Since those humble beginnings, it has swelled rapidly, weathered a storm that almost sank it, and then rose to ride the wave again.

Slingshot, a provider of AT&T Solutions designed to help companies utilize the internet to drive their business, is the Mobile Area Chamber’s Small Business of the Month.

Planet Cellular grew from that one kiosk to 85 retail stores before it was sold in 2013. Three years before that sale, however, the company began a project that would ultimately launch Slingshot.

“While we were growing the retail business, in 2010 AT&T approached us and asked us to pilot their U-verse product for their residential channel,” said Emily Kennedy, employee engagement manager for Slingshot. “Once we sold the retail stores in 2013, this side project became the main project. At that time, we rebranded as Slingshot and that is when our journey started.”

Three years ago, however, the company weathered a crisis that had it on the brink of collapse. “AT&T realigned channels, which at the time knocked us out of our main business,” Kennedy said. “Due to our successful history with AT&T, we were able to negotiate our way into the proper channel. Although this phase was difficult, we grew larger as a result of this circumstance.”

Since then, Slingshot has thrived on its ability to innovate and stay ahead of the curve, which is essential in a technology-driven industry. The company and its 40 employees have given back to the community through involvement in Big Brothers Big Sisters and Feeding America.

“We believe our people and our culture are the true differentiator between us and our competitors,” Kennedy said. “Our industry revolves around apartment complexes and internet. Luckily for us, these two things are growing rapidly and show no signs of slowing down. Although we have experienced some success, we believe we have barely scratched the surface on where we could go in this industry as it continues to grow.”

Slingshot is located at 202 Government St.