Mobile Recognized in fDi’s American Cities of the Future 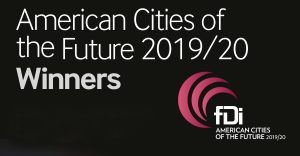 In a much-anticipated report, Mobile ranked as the fifth best city in the Americas for foreign direct investment strategy. fDi Intelligence magazine – a Financial Times publication – released the study American Cities of the Future 2019/20 Winners yesterday in the magazine’s June/July 2019 issue.

“To put this in perspective,” says Bill Sisson, the Mobile Area Chamber’s president and CEO, “New York was first, Chicago was second, followed by Montreal, Medllin [Columbia] and Mobile. That’s an impressive group of cities to be counted among.”

The rankings are part of a 16-page spread where Mobile had a small write up in the section dedicated to foreign direct investment strategy where author Naomi Davies highlights Team Mobile and the area’s “extensive transportation infrastructure.”

Sisson was quoted in the story saying, “While our logistics and infrastructure are unparalleled, our team-oriented approach and business-friendly policies are even more impressive. I invite everyone to see why more than 50 international businesses representing 19 countries are thriving here.”

“Mobile is an international community and we have plans to continue to diversify,” says David Rodgers, the Chamber’s vice president of economic development.”

In May, the Chamber presented its new foreign direct investment strategy to Partners for Growth economic development investors. “Our updated approach will help us promote Mobile as the global gateway for starting a business in the United States,” Rodgers adds.

Watch for more news and updates from the Paris Airshow on the Chamber’s blog and social media channels.