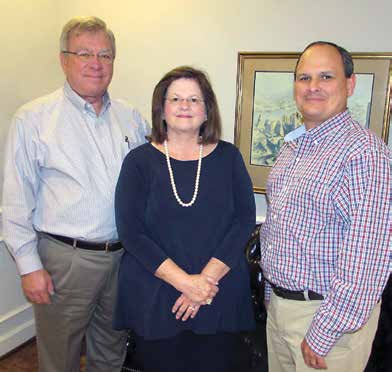 The Mobile Area Chamber named McFadden Engineering as the 2018 Innovator of the Year. Pictured here is the company’s management team of husband and wife Frank and Hope McFadden along with Brad Newton (right).

The Mobile Area Chamber named McFadden Engineering its 2018 Innovator of the Year. The company specializes in full-scale environmental services, including water and wastewater, stream modeling and groundwater remediation engineering; and civil services.

“We wanted to develop a system that treated everything from domestic sewage to industrial strength wastewater in an efficient, reliable manner that was low in operation and maintenance costs,” said Frank McFadden, president and founder.

The patent-pending system has been installed at area companies, including a car wash, seafood processor, landfill, funeral home and more. Once the system completes its process, the water can be reused in landscape irrigation and car washes, as well as in other applications.

As an example, the system installed at Serenity Memorial Gardens & Funeral Home of Mobile is used to grow flowers. The outcome is tested monthly by Alabama Department of Environmental Management and meets or exceeds the organization’s requirements, according to McFadden.

Licensed in five Southeastern states, the 30-year-old company has 11 employees, with plans to add additional staff before year-end.