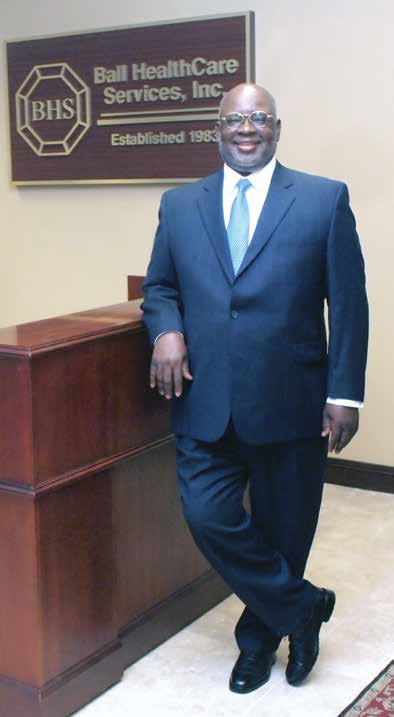 As a young man from New Braunfels, Texas, Clarence Ball started out as a high school standout defensive back with a promising athletic future. He headed to Texas A&I University on a football scholarship. A chop block he never saw coming ended that dream, only to make way for a new one.

Following that life-changing injury, Ball transferred to Southwest Texas University, where a gerontology article posted on a bulletin board helped him find a new plan for his future. He finished with a bachelor’s degree in sociology and went on to North Texas State University, earning a master’s degree in long term care administration.

Ball became the first black administrative intern with Wesley Woods Retirement in Atlanta, and was an associate research specialist at Emory University’s Center for Research in Social Change, before moving to Tuskegee as a licensed nursing home administrator in 1974.

He found he had a passion for caring for the elderly and the poor, and after managing the facility for several years, took a leap of faith to create Ball HealthCare Services.

Twin Oaks in Toulminville was his first purchase in 1983. Ball, president and CEO of Ball HealthCare Services Inc., is the Mobile Area Chamber’s 2018 Outstanding Entrepreneur. The Chamber will honor Ball, along with the three Small Business of the Year finalists, at a breakfast on Thursday, Aug. 23.

At the time Twin Oaks had a provisional license, meaning there was a lot of work needed to turn it around, and he did so within a couple of years. Ball found he had a knack for seeing beyond a rough exterior to the potential. That vision became his strategy – to look for underperforming senior care facilities and go in with good management, upgrade patient care and invest in the physical facility.

His quest to treat the whole patient led to several other endeavors. Thirty five years later, Ball HealthCare has under its wings 10 skilled nursing homes in Alabama and one in Florida, Hi-Tech Medical Services, Nursing Home Physician Services and Medchoice Pharmacy Services. To complement the company’s skilled nursing services, Ball has constructed 11 independent living apartment complexes to serve the elderly, handicapped and low- to moderate-income families. Ball is also involved with developing another 240 luxury apartments.

Whatever the supply chain path identified as his patients’ needs, he created.

Business Alabama ranked Ball HealthCare as the fifth largest in the state, based on its 1,007 beds and 1,300 employees.

“Clarence Ball exemplifies the spirit of entrepreneurship. He’s put in hard work, become an expert in his field, and is a team builder, risk taker and a visionary with the fortitude to overcome obstacles,” says Bill Sisson, president and CEO of the Mobile Area Chamber.

“I may be the one receiving the award, but I know the shoulders I stand on,” says Ball.

Grateful for the many people who he said took an interest and helped him, Ball strives to give back to others.

The company sponsors scholarships for employees and for those who attend Friendship Missionary Baptist Church with him. There are also scholarships set up at his alma mater and the University of South Alabama. Ball also strives to make sure high school seniors know the jobs available in healthcare and offers some of them part-time jobs.

He was an original board member of the Alabama State Port Authority and served on several other state boards. Ball is a former chairman of the Mobile Housing Board, YMCA, Mobile Area Chamber and Salvation Army, to name a few. He recently joined the University of South Alabama’s Mitchell College of Business Executive Advisory Council.

Ball is an early riser with a relentless work ethic, and is quick to credit his parents for that, and quotes them, saying, “Work hard. Be honest. Keep the faith and you’ll have a chance to be successful.”