The Business View – July 2015/Small Business of the Month 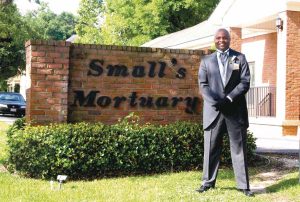 When he was a boy, while his friends were pretending they were race car drivers and famous athletes, C.J. Small was placing his He-Man figures in pencil-box coffins and imagining himself a funeral director.

Small’s parents were in their 40s when he was born, and along with church, a significant portion of his childhood was spent going to funerals, he said. He became fascinated with them.

“We were going to a church or to a funeral home for a certain reason – because of an object in the middle of the room,” he said. “And the object had someone in it. I was just always curious. How long are they going to be there? Are they going to sit up? What’s the process? I had all these questions that my parents could not answer. What happened to this person? It just drew my curiosity as to what goes on.”

So after some initial reluctance from his parents, Small went to mortuary school in Atlanta and came back to Mobile to open his own funeral home, Small’s Mortuary, as a 23-year-old in 2002. Part of his drive to become an entrepreneur was fueled by his desire to be a role model for other young African-American men, but as he opened his business on Broad Street, he found that his youth was an obstacle.

“People looked at a 23-yearold and the first thing that came to their mind was immaturity,” he said. “And it was the opposite for me. I wasn’t immature. I was pretty much an old man in a young man’s body.” Small’s Mortuary Inc. and Cremation Services is the Chamber’s Small Business of the Month.

“My first priority is trying to make sure customers – my families – are happy, and doing ministry for them during the worst time of their life,” Small said.

The company’s attention to customer service has led Small’s Mortuary to grow from its initial location on Broad Street and add new locations in Theodore and Fairhope, with another Baldwin County location recently opened. With 10 full-time and another 31 part-time employees, it’s a full-service funeral home, with cremation services at the Theodore location.

In addition to the new Baldwin County facility, Small is expanding the original Broad Street location, enlarging the chapel and prep room, and adding more funeral rooms and a reception room.

“The key to the growth of the business is customer service – making sure the employees are treated right, so you know they will treat the customers right,” Small said. “When (employees) are happy, they’ll make the customer have a good experience at a difficult time for them.”

In addition to continuing to build his business, Small has added a new responsibility, serving on the Mobile City Council. He said he wanted to continue the public service he’d begun with his involvement in several community organizations, including the Oakdale Community Service Club.

“The only difference now… is I’m at the table,” Small said. “I’m allowed to make some decisions as to what’s going on within our city.”