Guiding a New Future for the City 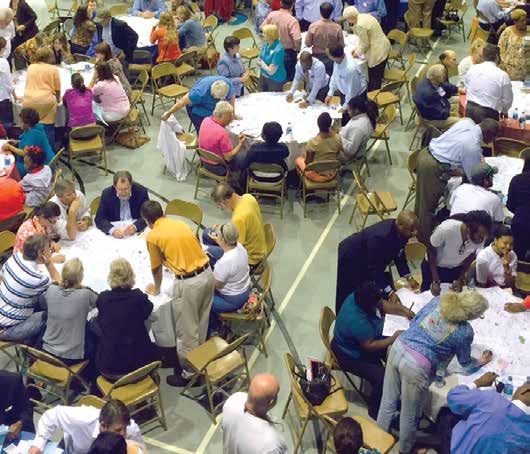 Almost a year ago, the city of Mobile launched a collaborative effort with citizens, community leaders, elected officials, city employees and consultants to create a citywide comprehensive plan. The process began with several months of public input in which hundreds of Mobilians shared their vision for Mobile’s future.

“I got involved because I, like so many others, want the best for our community,” said Raymond L. Bell of Bell Law Firm. “My interests were focused on the future of city-wide housing and community assets, as well as a robust business, commercial and industrial economy.”

The result is Map for Mobile, which according to city officials, is a long-range guide to improve quality of life, build better financial stewardship and increase effectiveness in all areas of city operations.

“Good strategic planning is a meeting of the minds, and Map for Mobile has accomplished that through communitywide involvement at every step of the way,” said Bill Sisson, president and CEO of the Mobile Area Chamber. “Without question, this strategy will guide Mobile into the future and provide an infrastructure framework that will be a great economic development tool.”

The final plan was completed in November 2015 and implementation is underway, guiding decisions – near-term and long-range – in zoning, land use, code and ordinance changes and capital improvement priorities. It does not propose rigid projects, programs or improvements; instead, it sets goals and policies the city uses to establish concrete plans and programs – many implemented gradually over the next few years.

“Successful cities of today are intentional about building walkable, livable places that enrich the lives of their residents,” said Elizabeth Stevens, president and CEO of the Downtown Mobile Alliance. “Map for Mobile is the important first step.”

One theme running throughout the plan is density, reflecting a nationwide shift in planning strategy. Increased density allows for more efficient delivery of public services and takes advantage of all areas with room for regeneration. Decades ago, development pushed farther from the city center into the suburbs. Now, the strategy is to rebuild older areas and encourage innovative ideas for developing a denser city.

While Mobile looks to an era of expanded opportunities for economic development and accelerated growth, it also faces a number of challenges such as limited mobility, sprawling conditions and declining neighborhoods. Map for Mobile looks at these challenges as the city’s biggest opportunities. “If Mobile can generate positive change in these areas, the quality of life for its citizens will improve and ensure continued growth,” reads the plan.

Mobile Mayor Sandy Stimpson championed the document throughout the process. “Cities rely on leadership to help foster growth and be catalysts for collaboration and cooperation,” Stimpson said. I assure you that Mobile’s entire city leadership is dedicated to improving the quality of life for our citizens and investing in needed changes and improvements.”