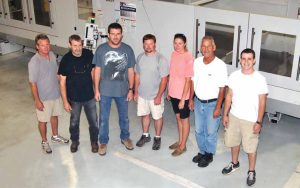 Locally-headquartered Star Aviation announced it will expand its facility at Mobile Aeroplex at Brookley and hire between 20 and 50 additional employees over the next two years to keep up with its growing workload.

“This growth is outside of Airbus,” says Johnny Wacker, Star Aviation’s executive director and a company partner, who announced the company’s manufacturing division expects to break ground in the next few weeks on a new 24,000-square foot facility, adjacent to the company’s principal office. The estimated completion date is year-end 2015.

Currently, the company has 18,000 square feet, but double digit growth over the last five years is being driven by the data explosion. He adds that, the company will look at retaining all or part of the existing building at 2150 Michigan Ave., based on the company’s anticipated work.

“We have been able to weather the storms when there was an industry downturn, and have worked to position ourselves to be ready for the resurgence, which we are now experiencing. As a local-born company, we are proud that we are able to be part of this evolution, and able to expand our business and job offerings,” says Wacker.

“Star Aviation is a great example of local existing industry growth in the aerospace sector. With their capabilities, ingenuity, commitment and history in our region, Star serves as a shining example of Mobile’s long standing success in aviation,” says Troy Wayman, the Mobile Area Chamber’s vice president of economic development.

“Over the years we have built a solid manufacturing foundation within the aviation industry, and the expansion will allow us the opportunity to further capitalize on the strong industrial resources and skilled workforce in the Mobile area. These are exciting times in Mobile for aviation, and this expansion will give Star the needed bandwidth to accommodate existing customer growing demands as well as attract new customers worldwide,” says Gordon Smart, vice president of business development at Star.

The facility will have a more efficient design for manufacturing and room for several new pieces of equipment.

Once the parts are built and engineering is complete, the clients’ maintenance repair and overhaul vendor will do the actual installation.

“In addition to the new facility, Star Aviation is expanding our machining capabilities this year by adding one of the largest travel bridge mills on the Gulf Coast, with production to begin this summer. We already have immediate orders for large aircraft antenna adapter plates, which are to be delivered this year. We are bidding additional work for numerous customers including Airbus and The Boeing Co. Once production begins, we’ll be adding machinists and fabricators to our staff, and expanding our quality assurance department to bring in-house capabilities that we are currently outsourcing out-of-state,” says Jeff Osborn, Star’s vice president of manufacturing.

Currently, the company employs 130 people with 85 in Mobile and 45 in Seattle.