Phoenix Helps People Rise from the Ashes of Tragedy

The Business View – March 2016 / Small Business of the Month 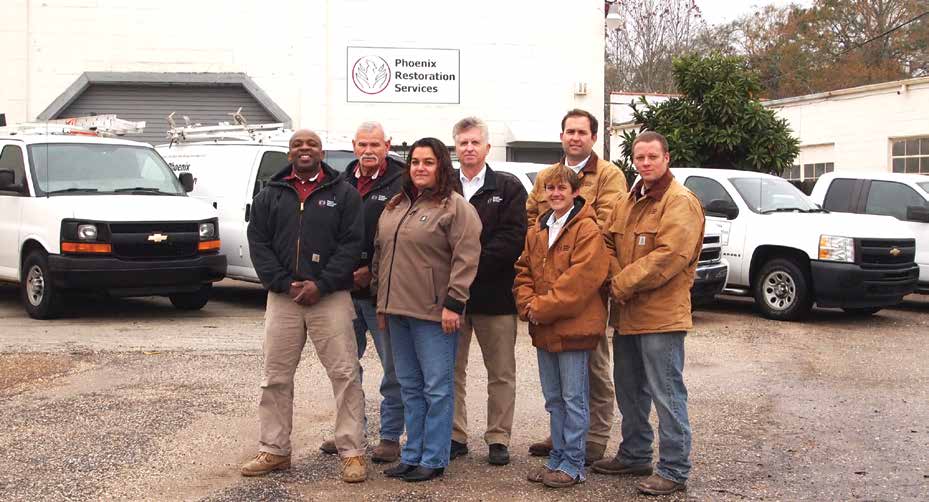 When tragedy strikes – and life as you know it vanishes in an instant – it helps to have someone on your side who’s been there before. Flooding. Tornadoes. Fire. Hurricanes.

Phoenix Restoration Services Inc. has seen it all in its six years of operation, and each employee adds to the company’s expertise.

“We don’t do kitchen and bathroom remodels. We are only called after something’s gone terribly wrong, and the biggest part of what we do is to put people back together after a tough loss,” said Edward Inge, the firm’s general manager.

Above all, Inge said the firm’s business model stresses a team approach because “it takes a village to put things back together.”

“When we get involved in these projects, they can be complex,” he said. “There are a lot of different tasks that have to be handled, and if any one of those gets skipped or glossed over, the entire recovery process is jeopardized. Everybody here has their individual role, and each role is equally important.”

In addition to Inge, the company also employs an office manager, an estimator, a superintendent and four construction technicians. As a result, when tragedy strikes, the team bolts into action seamlessly.

Consider, for instance, the Christmas tornadoes that ripped through Midtown in 2012.

“As far as I’m concerned, Midtown is our neighborhood, and we could literally walk over to the damage after it hit,” he said. “We responded to Mobile Infirmary the night it happened, and then it was five to six months of nonstop work, but it was so rewarding to be involved in helping put the neighborhood back together.”

Inge said he anticipates the company will continue to add one new employee per year until the payroll hits about 12.

Financially, the firm has experienced “substantial year over- year growth every year since we started,” he said. “I had to be crazy to start a construction company in 2009, but I think starting during the financial crisis – when the world seemed to be coming to an end – was one of the best things that could have happened to us because it taught us if we can survive then, we can survive anytime,” Inge said.