Mobile Can Back Up its Optimism 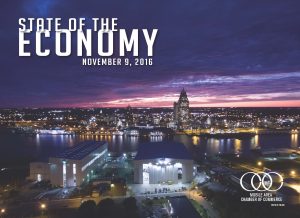 Many local businesses have big plans for 2017, according to survey results released during the Mobile Area Chamber’s State of the Economy yesterday.

The Chamber surveyed its members in September and as a result learned:

“That’s a lot to look forward to, and the Chamber will be on hand to assist as needed,” said Bill Sisson, the Chamber’s president and CEO. “I believe Mobile’s economic future is bright and it appears many business owners and managers feel likewise.”

To help the Chamber direct its efforts, members were asked about barriers to growth. Top responses were: attracting and retaining qualified employees; global market conditions and weak sales.

From the Industry Experts

At the State of the Economy, attendees also heard from four industry experts. Highlights from their remarks are as follows:

Aerospace: Guy Hicks with Airbus Group Inc. said the 20-year demand for aircraft would exceed 33,070, with 5,807 made in Mobile.

Real Estate: Daniel Dennis with Roberts Brothers compared the 2016 residential housing market to what he considers the last normal year in Mobile, 2004. This year is surpassing the 2004 total and he is encouraged by increasing home appreciations.

Dennis walked the audience through the impact of economic development efforts on real estate, with the largest effect found first on residential rentals, followed by residential sales and then industrial, retail and sales occupancy.

Shipbuilding: Travis Short with Horizon Shipbuilding stated shipbuilders worldwide have cut 20,000 jobs and Short said to be prepared for more. He offered Horizon’s model for survival in a down market – work hard, be diverse, hold relationships dear, innovate and challenge yourself.

Chemicals: Bonnie Tully with Evonik Industries said there was pent-up demand locally for a chemical park. Evonik established one, leading to investments by Bayer and BASF on site. She added the facility is only 40 percent developed.

Tully credited low natural gas prices for the manufacturing renaissance and credited it for boosting the chemical industry. If prices stay low, she said it will encourage future on-shoring by other manufacturers. He

Attendees were provided detailed data about Mobile’s economy. It can be accessed on the Chamber’s website.