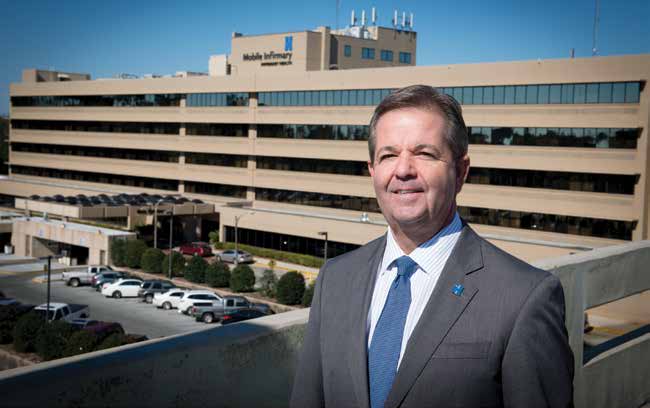 As president and CEO of Mobile’s largest private employer (more than 5,000 workers), Mark Nix is always looking to tackle new opportunities. And just a couple months into his volunteer position as Mobile Area Chamber board chairman, the head of Infirmary Health System hit the ground running. Nix outlined his goals as chairman during the Chamber’s 179th annual meeting in January, having been preceded by 2015 Chairman Frank Lott with Heritage Homes.

“What stands out about what’s taking place in 2016 involves (the Chamber) organization – our staff, our board and our members embracing change,” he said. Successful membership organizations, he added, remain committed to change and evolution.

“Our membership is changing every day, and we walk a fine line between preserving some of the tried-and-true – such as this annual meeting – and introducing new ways to engage our business community that are vastly different than what we’ve done before,” he said. “We must continue tapping into the talents of our young professionals.”

Nix pointed to several areas where the Chamber is embracing change, including putting emphasis on younger professionals in volunteer leadership positions focusing on innovation, notably along the St. Louis Street corridor in downtown Mobile; and listening to members’ views of the Chamber and ideas about how to engage more people.

“Over the last couple of years, I’ve become even more involved with the Chamber and met business owners, managers and employees of companies who I would have never come across otherwise, and I have been inspired,” he said. “There is an incredible cross-section of businesses here – so much more than I’d ever thought – even though I’d always heard the Chamber talk about our diverse economy.”

“I think Mark’s true hallmark is his extensive community involvement,” said Chamber President and CEO Bill Sisson. “He has always been very involved at the Chamber, but he also serves on many other boards in the arts, sports, education and charitable arenas.” Sisson specifically noted Infirmary Health’s big win of the national Medline Pink Glove Dance Video competition, and the money it raised for breast cancer research.

Nix joined Infirmary Health in the 1980s, starting as vice president of real estate and property management. He worked his way up with the healthcare system, and was named its president and CEO in 2009. Interestingly, Nix began his professional career as an accountant with a national firm before joining a real estate development and management company here in Mobile. He has a bachelor’s degree in accounting from The University of Alabama and a CPA license.