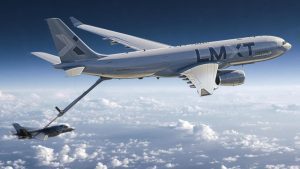 “Establishing this production work in Alabama and Georgia confirms Lockheed Martin’s commitment that the LMXT will be built in America, by Americans, for Americans,” said Lockheed Martin Chairman, President, and CEO James Taiclet.

“Over our 50-year history in the U.S., some of our proudest moments have come from supporting our American service members,” said C. Jeffrey Knittel, chairman and CEO of Airbus Americas. “Our U.S. workforce, which is more than 35% military veterans, is eager to see an Air Force tanker join the fleet of Airbus aircraft flying for the U.S. Army, National Guard, Navy and Coast Guard.”

The bridge tanker program calls for aircraft based on existing technology to supplement the Air Force tanker fleet after the last KC-46 is delivered in 2029 to replace the KC-135s that are aging out and cover the gap until the service develops its future Advanced Air Refueling Tanker.

Should they win the Air Force KC-Y tanker competition, Mobile would see a third final assembly line for the A330 built out on the Brookley by the Bay property at the Mobile Aeroplex at Brookley. It would be the first widebody aircraft to be assembled in Mobile. The third assembly line would mean a $450 million investment and 400 direct jobs with an average salary of $60,000 per year.

“Today’s economic development announcement was special. Most Mobilians can recall the feeling in 2008 when our community lost the original tanker contract. Ultimately, Mobile turned that loss into two new final assembly lines that have created thousands of high-paying jobs,” said David Rodgers, vice president of economic development at the Mobile Area Chamber of Commerce. “Today, we show the world that we are ready for the next chapter. We show that our workforce is ready to step up to the next challenge and ready to build tankers.”

“Mobile has proven it has a skilled workforce ready to build the world’s very best American-made airplanes. Today’s announcement is just another indication of a bright future ahead for the City of Mobile, Lockheed Martin, Airbus, and the defense aviation industry in general. We are grateful for the continued investment in our community from Airbus and welcome Lockheed Martin to what we believe will be a very successful partnership,” said Mobile Mayor Sandy Stimpson. “Our commitment is to continue the investment in our infrastructure and workforce that’s needed to support the future of Airbus and Lockheed Martin. The best is yet to come.”

The LMXT would be built on the combat-proven design of the Airbus A330 Multi-Role Tanker Transport (MRTT). With Lockheed Martin as the prime contractor, the LMXT will be built in two phases. It will be manufactured first as an A330 airliner at the Airbus facility in Mobile, then will be converted to the LMXT tanker at the Lockheed Martin Aeronautics facility in Marietta, Georgia.

“Today’s announcement further cements Alabama’s reputation for excellence in the aerospace industry,” Governor Kay Ivey said. “We have a world-class workforce making Mobile a top city for manufacturing and innovation, and we are excited to welcome the Lockheed Martin LMXT to Brookley. This state-of-the-art aircraft is the right plane for the war fighter, and we’re thrilled to have it built in Alabama.”

“This partnership between Lockheed Martin and Airbus brings together two titans in the aerospace/aviation sector. It also heralds a new shared synergy in the military aviation space between the State of Alabama and the State of Georgia as Airbus will assemble the well-proven A330 jet aircraft in Mobile and Lockheed Martin will militarize the jet, transforming it into the LMXT. From the Alabama perspective, this signifies the potential of a significant expansion of Airbus’ activities in Mobile and could elevate Alabama’s critical role in our national defense,” said Secretary of the Alabama Department of Commerce Greg Canfield.

“We are thrilled to support the expansion of Airbus Mobile at the Mobile Downtown Airport,” said Chris Curry, Mobile Airport Authority President. “This announcement further proves that we are the transportation hub of the Central Gulf Coast. We know that when our tenants win, we all win.”

“Alabama Power’s Mobile Division and our Corporate Economic Development group have put much time and effort into this project,” said Alabama Power Mobile Division Vice President Patrick Murphy. “Alabama Power is proud to partner with the Mobile Area Chamber of Commerce, the City of Mobile, Mobile County, the Mobile Airport Authority and the Mobile Industrial Development Board on a project like this one that is such a perfect fit for Mobile. Alabama Power is appreciative of being on Team Mobile and we look forward to continuing to work with Lockheed Martin and Airbus to make this project a reality.”

About the Mobile Area Chamber’s Economic Development Efforts
The Mobile Area Chamber of Commerce is a private business organization with more than 1,800 members and the economic developer of record for the City of Mobile and Mobile County. Thanks to the support of the Chamber’s Partners for Growth public and private investors, from 2011 to date, Mobile’s economic development efforts have created 6,557 new jobs and retained 502 more. Capital investments topped $4.43 billion, including 31 new businesses recruited and 56 expansion projects at existing area companies. Additional information is on the Chamber’s website, Facebook, Instagram, LinkedIn, Twitter and YouTube.