How ASF Intermodal Keeps on Truckin’

The Business View – October 2015 / Small Business of the Month 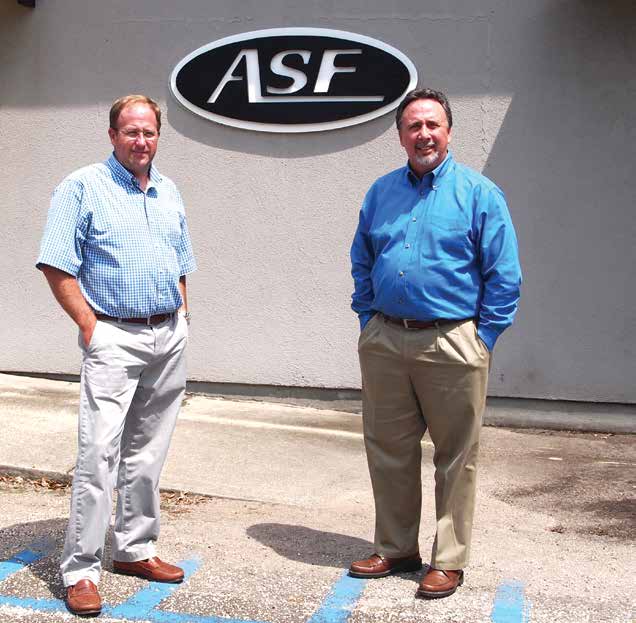 Michael Hayes (left) and Michael Smith (right) started their own trucking company, ASF Intermodal located at 3812 Springhill Ave. in 2011. The business partners decided to start their own company rather than move to Minnesota after their former employer’s business was bought and employees were asked to transfer up North.

They both worked for a trucking company in Birmingham that was bought out by a Minnesota firm. “Neither one of us had any desire to go to Minnesota,” said Hayes. “They were trying to wine and dine us in Minnesota in February. It really wasn’t pretty. We grew up in the South.”

And that’s how ASF Intermodal was born.

Smith and Hayes left in 2011 to open ASF, which specializes in intermodal drayage – moving containers off ships and rail cars to distribution centers or end customers and back again. ASF transports containers and cargo, such as electronics, raw materials and lumber.

The company, headquartered in Mobile with Smith as president and Hayes as chief financial officer, has grown from two terminals in 2011 to 11 throughout the Southeast, Midwest and Texas. It has 80+ employees, as well as contracted drivers and 450 trucks, with locations in Atlanta, Charlotte, Charleston, Chicago, Dallas, Fort Worth, Houston, Memphis, Savannah and Norfolk.

ASF Intermodal is the Mobile Area Chamber of Commerce’s Small Business of the Month.

Hayes said the company’s success can be attributed to a multitude of factors, but one thing in particular has been central to their rapid growth.

“It’s really how you treat the drivers,” he said. “In transportation, it really doesn’t matter what niche you’re in – your ability to grow your fleet is directly related to how well you are able to recruit and retain your drivers.

“We don’t spend a lot of money on recruiting with ads like a lot of trucking companies do. What we do spend money on is paying referral fees and things like that to drivers who are currently driving for us. We try to do our best to make them happy. If we’re able to do that, then they in turn will go out and talk to their friends and colleagues.”

Keeping drivers happy is particularly important these days, as Hayes said there is a shortage in the workforce.

Intermodal companies have an advantage, he said, in that their drivers typically run shorter routes and aren’t away from home as long as over-the-road, or long-haul, truckers.

“The drivers don’t want to stay away from home for weeks at a time like they did 15 years ago, 20 years ago,” Hayes said. “Back then, it was expected; it was part of it. As time goes on, generations have changed, and they want to be home every day. Over-the-road drivers are getting replaced in many ways by the rail.”

Intermodal, meanwhile, is “the fastest-growing segment right now, and it has been for several years,” Hayes said, adding that improvements at the Alabama State Port Authority and other ports, and the widening of the Panama Canal, scheduled for completion early next year, also will help business. “It should continue for the next five or 10 years.”