As always, I had high hopes of blogging every day – with several posts per day, but that just did not happen. I hope you’ve been following the Mobile Area Chamber of Commerce on our social media sites – Facebook and Twitter – as I’ve tried to keep fresh information up there.

So, what’s been going on? A lot. On Tuesday, Team Mobile including the City of Mobile, Mobile County, the Chamber, University of South Alabama, Mobile Airport Authority and Alabama Power were given a chance to see some of Airbus’s next-gen projects including virtual reality training for pilots on Airbus planes, quantum programming and security – some of which has been installed the Mobile U.S. Manufacturing Center. 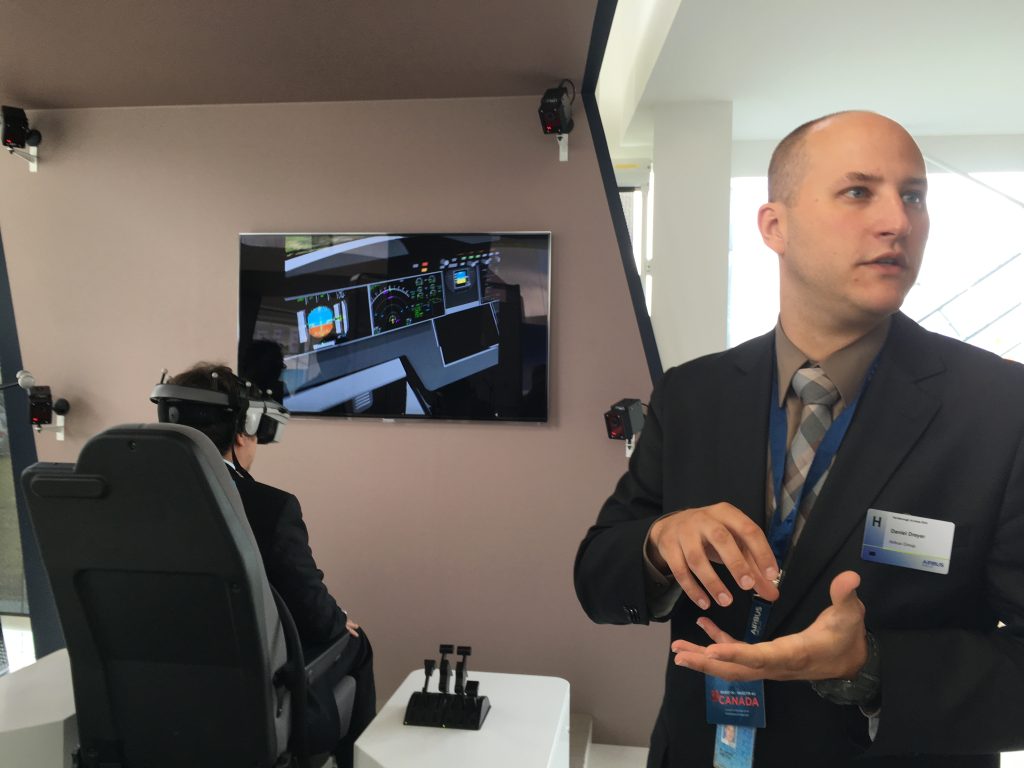 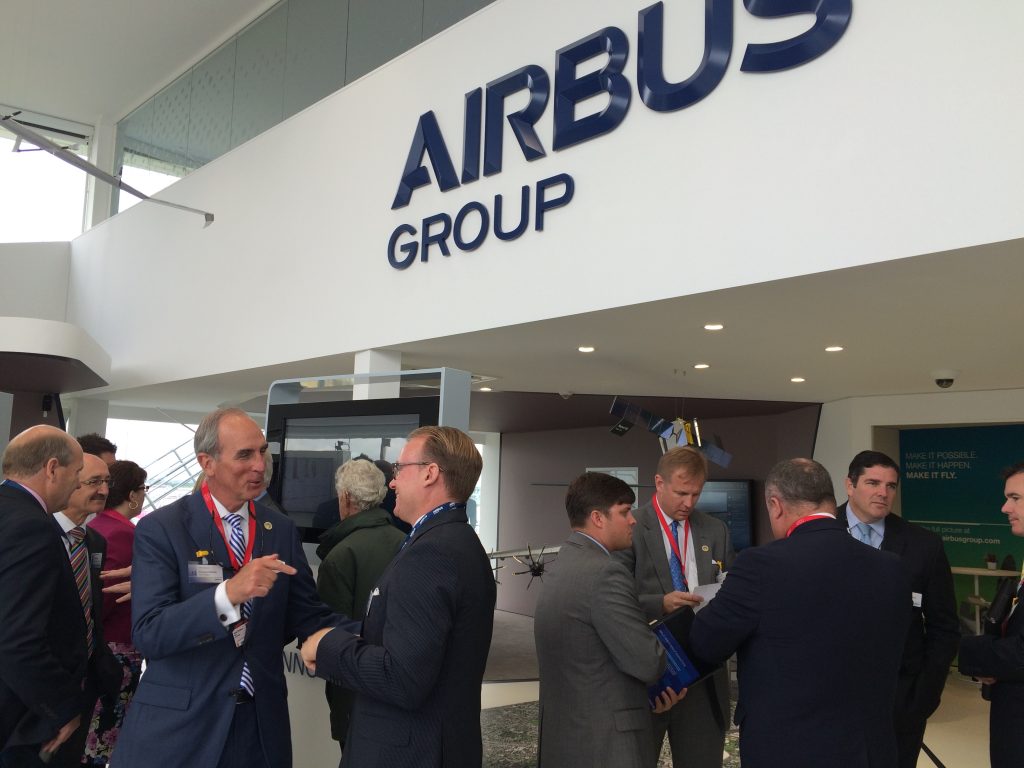 A view from inside the Airbus facility at the Air Show.

Following the innovation tour, the group was hosted to tours on both the A350XWB and the A380. Some were more excited about boarding an A380 for the first time (me) than others! You really get a sense that the XWB (extra wide body) is an incredibly special aircraft that will again change the way passengers want to fly – with higher ceilings, customized lighting packages, state of the art electronics and a larger seat configuration. 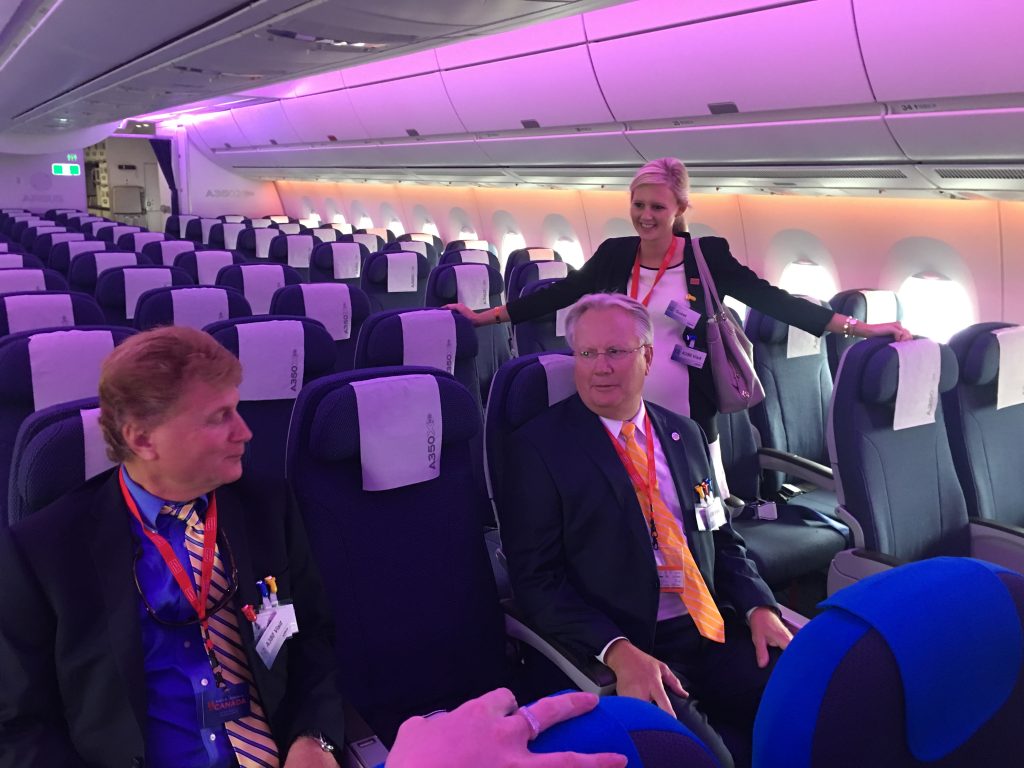 The A350XWB is a masterfully designed and engineered plane. 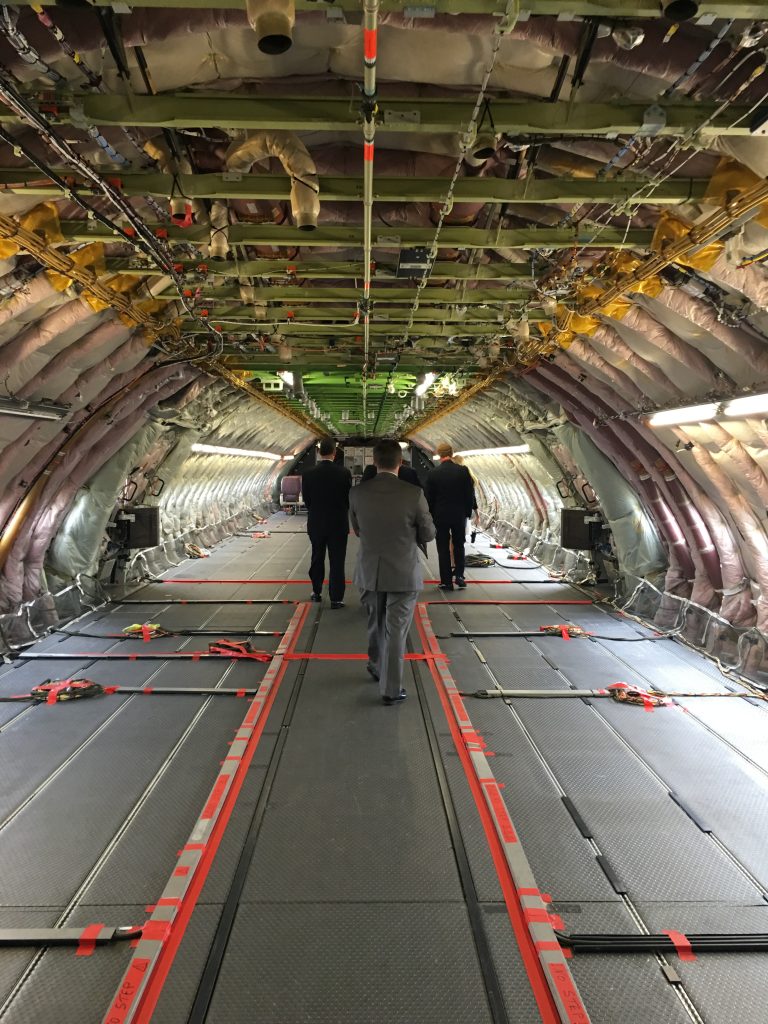 The A380 pictured here at the show is a shell, but you can immediately get a sense of its size. It is touted, among other things, as one of the quietest planes on the market.

After the tours, the delegation broke off with a variety of goals in mind. Those included: 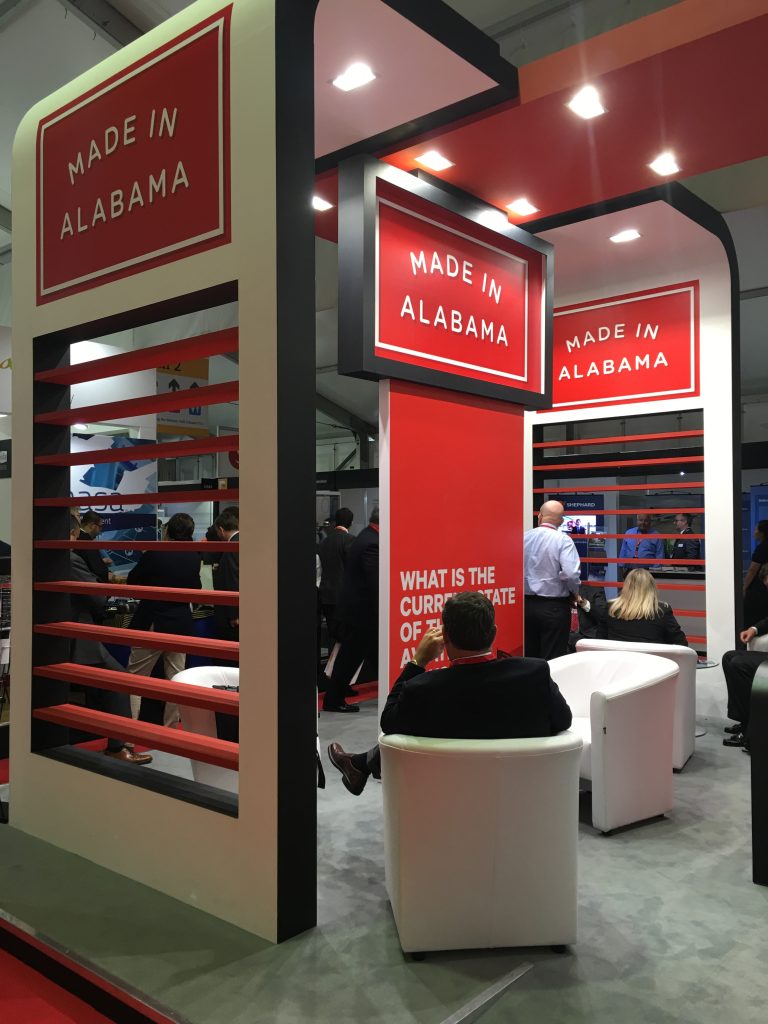 The Alabama pavilion was meeting place for industry appointments throughout the show. 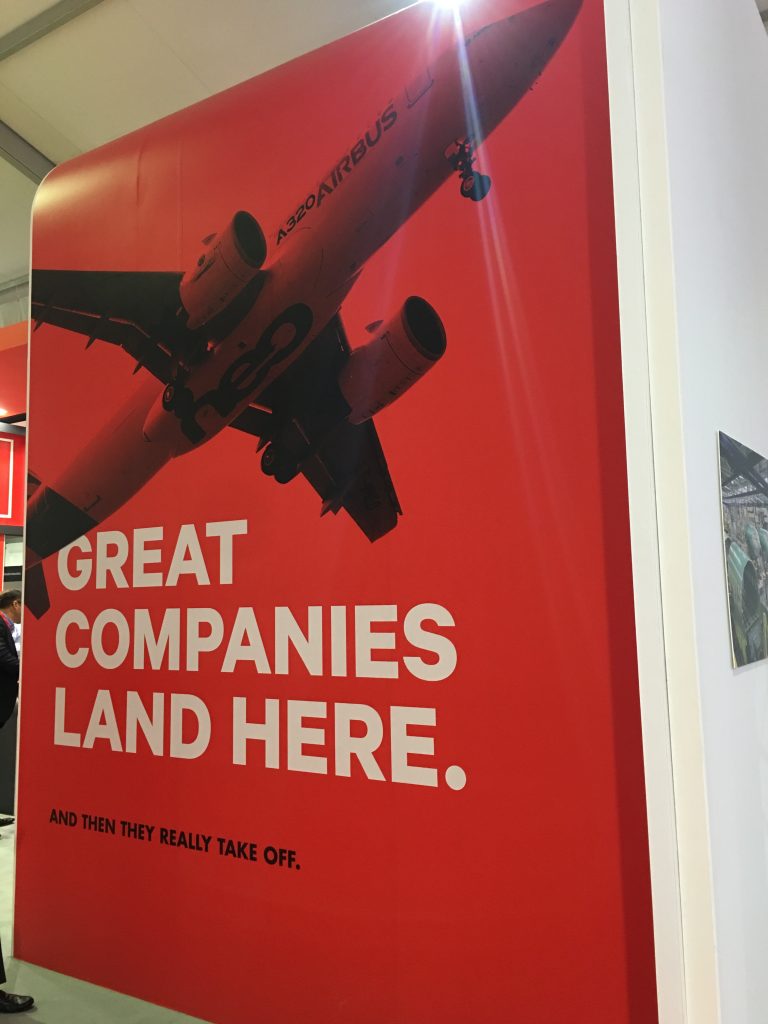 Made in Alabama’s promotion of Mobile and our Airbus facilities.

Finally on Tuesday, nine partners in Baldwin and Mobile counties came together to host a Mobile Bay Aerospace Reception for nearly 175 aerospace executives from around the world. Allan McArtor, chairman & CEO of Airbus Group, gave remarks on behalf of his company, along with Roger Wehner with the Mobile Airport Authority and Lee Lawson with Baldwin County Economic Development Alliance. This bi-annual event continues to draw influential aerospace sector employees from places such as Airbus, Thales Group, Lockheed Martin, KLX Aerospace, Segers Aerospace and many others. 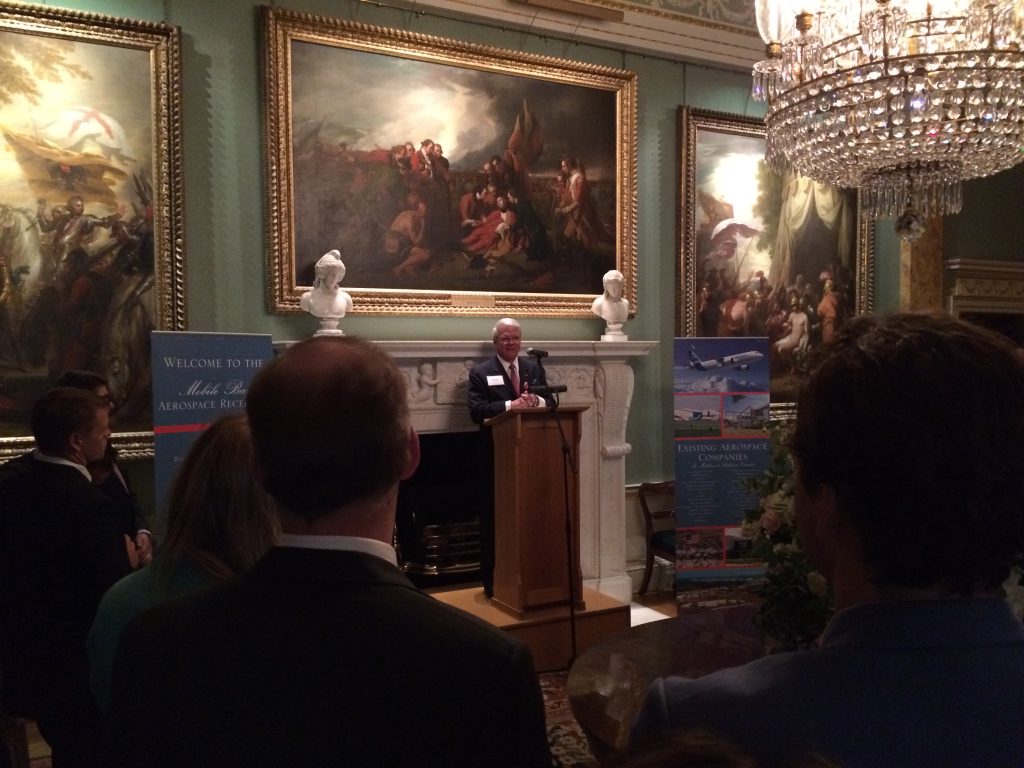 Allan McArtor was the guest speaker during the Mobile Bay Aerospace reception. Event hosts had a captive audience of aerospace executives from across the globe.

On Wednesday morning, Bill Sisson, George Talbot and I met with Courtney Fingar, an Alabama native, who is editor-in-chief for FDi magazine in London. We were able to share Mobile’s significant foreign direct investment story, and thanked her having named Mobile as one of the magazine’s Aerospace Cities of the Future in the most recent issue. 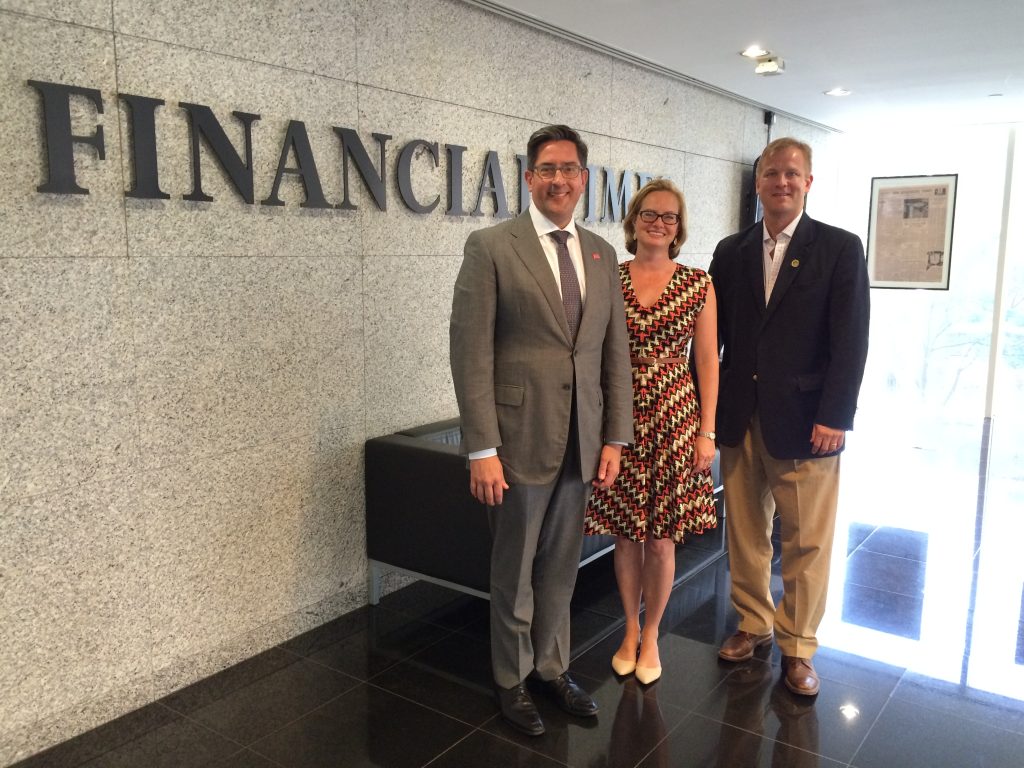 Pictured above is Bill, Courtney and George at the Financial Times headquarters in London.

Lastly, as most of the delegation headed back to Mobile, I spent a couple more hours at the air show, mainly to stop by the Alabama pavilion and to take in some of the flying demonstrations with a couple of my Airbus counterparts. There I had the pleasure of watching the military-class M400, the A350XWB and the A380 fly. It was a great way to close this year’s efforts to promote Mobile to companies across the world. 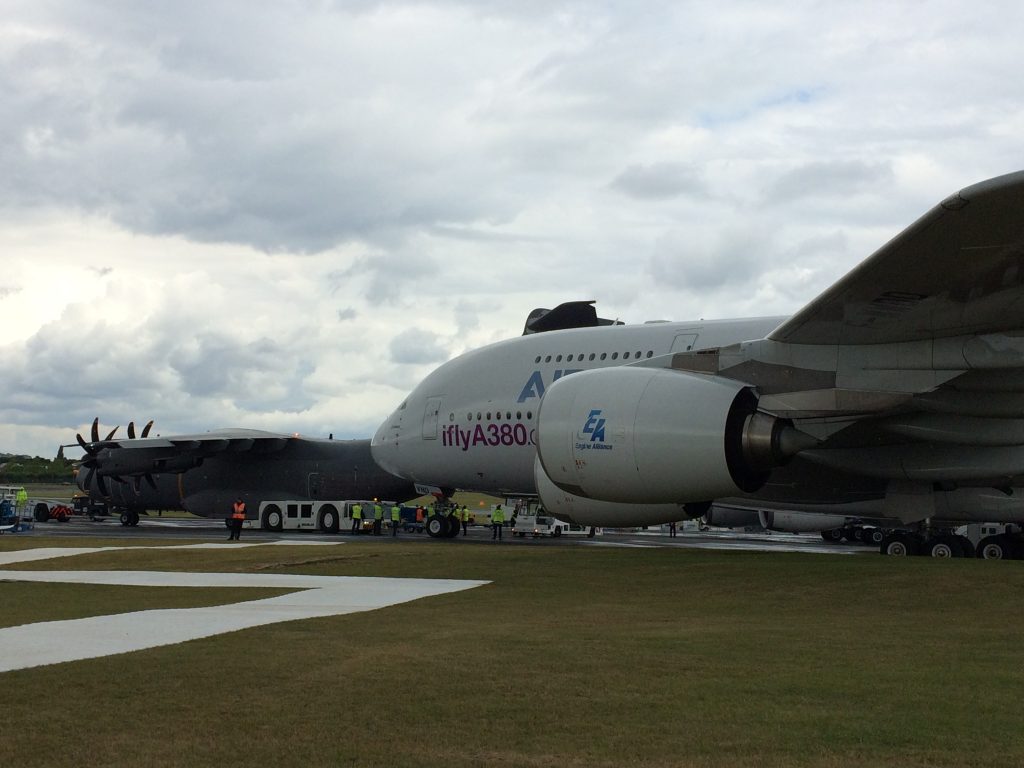 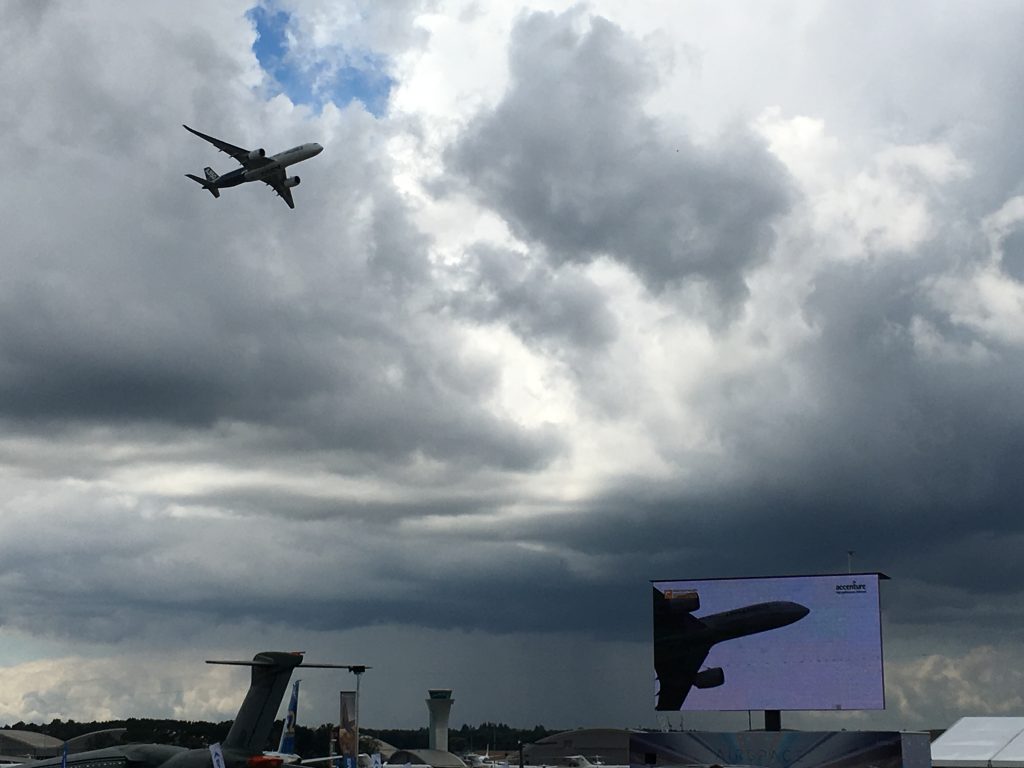 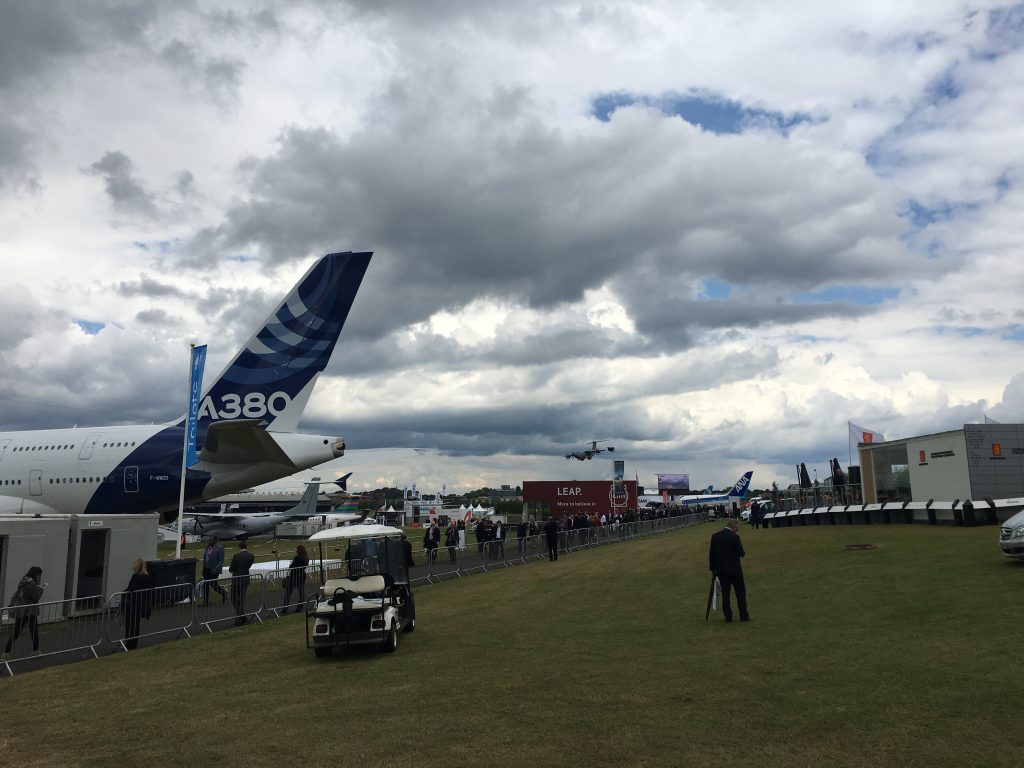