Chamber Signs MOU with American Chamber of Commerce in Morocco

Mobile Area Chamber President & CEO Bill Sisson said about the agreement, “This opens a strong relationship between our chambers of course, but more importantly it’s a way for (Mobile area) businesses to have a gateway to business opportunity in Morocco and, in turn in the U.S. for them.”

The U.S. and Morocco have operated under a Free Trade Agreement for the last 10 years, and it’s the only country in Africa with one. The Mobile Area Chamber is in Morocco and Spain as part of an Alabama Department of Commerce-led trade mission.

This agreement is by and between:

The American Chamber of Commerce in Morocco (AmCham Morocco), a not-for-profit organization aiming at promoting the interest of its 300 members in expanding their opportunities in Morocco and the U.S. through advocacy, information, networking and business support services, an accredited organization by the U.S. Chamber of Commerce in Washington, D.C., represented by Walter Siouffi, President

Purpose of the agreement:

– Exchanging best practices between the two chambers of commerce;

– Facilitating linkages and matchmaking services for members of both chambers especially small and medium-sized companies looking to expand their business opportunities in Morocco or in Mobile, Alabama; and

– Sharing information about main events and trade shows for importers, exporters and investors.

This agreement is signed in Casablanca on March 9, 2016 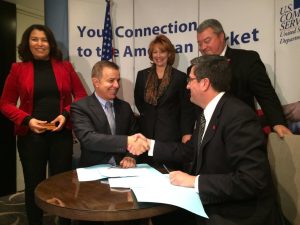