Capitalizing on a packed first day, Team Mobile once again hit the ground running on Tuesday at the Paris Air Show – the last day for most of the delegation. The day was highlighted with six scheduled meetings for, followed by an evening reception hosted by the Mobile Bay delegation for more than 180 aerospace executives.

Interesting for some readers to note, getting to the airshow fascinates me. From our hotel, we walk about a ½ mile to the train station, ride it to the Le Bourget station (that’s the name of the air field where the show takes place). From there we wait in line to board a bus taking us about a mile and a half to the show. Traffic as you might imagine is incredible – busses, cars, taxis, ubers, scooters, motorcycles all filling the street. We’ve seen attendees riding skateboards and pushing scooters trying to get to the show too. Our bus driver yesterday pretty much stopped on the side of the road and dumped us out, rather than taking us into the show’s bus depot. Needless to say patience rules the day when getting to and from the show – especially since it’s been in the mid-90s while we’ve been here. Everyone’s melting – I especially feel bad for the men in suits and ties. I’m thankful for a dress. HA! 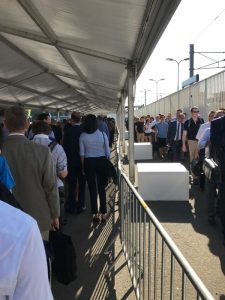 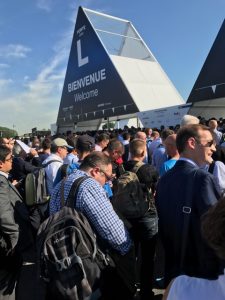 On Wednesday, several of us from the Chamber, Mobile Airport Authority and University of South Alabama will head back to the show for one final day. This wrap up will give us a chance to make some cold calls on potential suppliers, and also walk the show. Walking it, according to Troy Wayman , our VP of economic development,  “Puts in perspective just how significant the aerospace industry is as a global employer.” Not only are airplane manufacturers at the show, but so are their parts suppliers for engines, landing gear, seat manufacturers, etc. And then the suppliers’ suppliers are also here – those who make rubber, leather, nuts and bolts and more. I’ll try and get some photos from around the show tomorrow and share them. 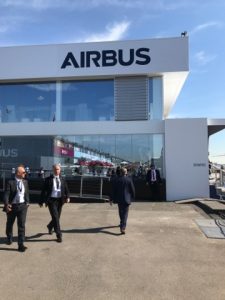 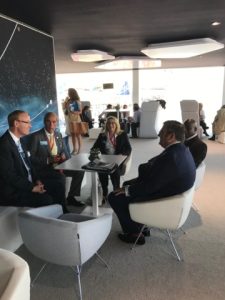 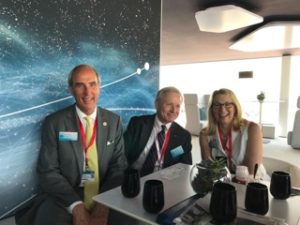 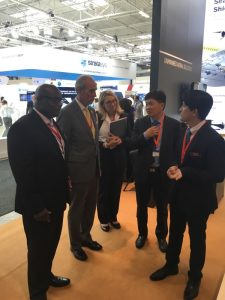 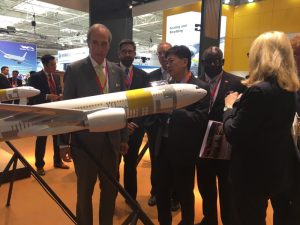 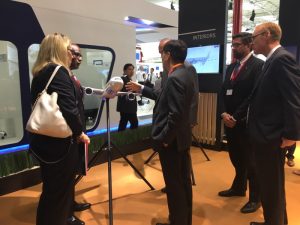 Several members of Team Mobile visited with ST Aerospace while at the air show.

Since I mentioned the Airbus A380 yesterday, I wanted to share with you a couple more photos of this beautiful aircraft in flight today at the show. I was lucky enough fly on one this spring, and when we were in Atlanta heading over here, there were several posters noting ATL would be flying in/out A380s soon. That’s it for now. I’ll post more tomorrow. Thanks for following our blog! 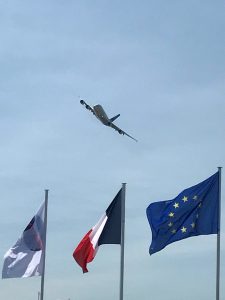 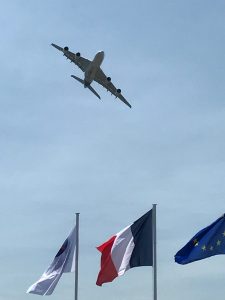